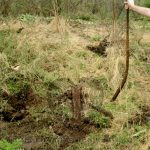 An H&FRHS volunteer holds up the pitch-point crowbar after its discovery during a survey of the Lewistown Fishing Creek Bridge site. The hole from which the crowbar was pulled is on the left and a fishplate rail joint bar which was above the crowbar in the hole is at the center of the image. The H&F tracks once traveled at the top of this mound where light green weeds can be seen growing in the image. 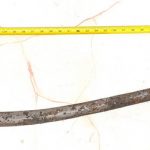 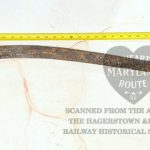 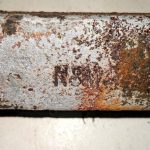 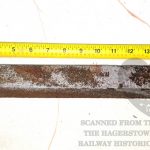 Pitch point crowbars such as this serve two purposes in rail work, prying rail up to slide it over or flip it, and serving as the handle for a railroad jack which lifts rail off of the railroad ties.

This crowbar was found approximately 80% buried at a 50 degree angle on the side of the berm, or long narrow hill on which the trolley track once traveled, in between the two bridge structures.  A railroad joint bar or “fishplate” was found atop the crowbar signalling that it was used in the maintenance or removal of tracks at that site in the mid 1950s.

A notable detail regarding this crowbar beyond its notable bend from excessive force which resulted in its being discarded and left where it was discovered is the presence of an ownership stamp “N&W.”  This tells us that the crowbar was purchased or borrowed from the Norfolk & Western Railway and kept in use on the H&F.  The H&F interacted with the N&W only in Hagerstown and only until 1947 when Hagerstown trolley service ended.

One accompanying photograph shows an H&FRHS volunteer holding the crowbar beside the hole dug to remove it from the berm.